T minus ten weeks today! Preparation is going very well. I have now ascertained that we'll be able to take the roof rack off the Magnum, since all our luggage will fit easily under the bed; this will probably save us a couple hundred bucks in gas thanks to reduced drag, believe it or not.

I am experimenting with having a pixie cut so that I won't have to brush my hair on the road, but it turns out, no, my hair needs brushing no matter what. It's very fine, and there's a lot of it. Too much of it; it always takes twice as long as the typical customer for me to have it cut. I kind of adore having super short hair, though. I might just settle for wearing spiffy hats in the morning to tame the bedhead.

One of my developing concerns about this roadtrop is bears. Stephen Colbert knows what he's talking about. Bear in mind (bears on mind) I grew up in Australia, where there are no large predators out in the bush, unless you are a baby and count dingoes (I'm going to hell, by the way). It's astounding to me that Americans become hysterical about our spiders and snakes when in this country, there are BLOODY GREAT BIG THINGS WITH TEETH AND CLAWS THAT EAT YOU. Hello. Also, you have plants that cause people to break out in hives just by touching them, and they're everywhere, what's up with that?

Anyway, back to bears. My own hysteria was awakened after I bought and read Yellowstone Trails: A Hiking Guide.

At the very start of the book, the authors launch into what seems to me a huge section dealing with the threat of bears, which contains such sage advice as "Bears are unpredictable. Avoid meeting one in the backcountry." I understand that there are crazy people in the world who might actually seek out a bear instead of avoiding them (see: my favorite documentary, Grizzly Man), but to me this is kind of like getting a horoscope that says "Avoid making mistakes today." Here's where things get really interesting, though:

PLAYING DEAD
Leave your pack on. Lie on your stomach. Interlock your fingers over the back of you neck and bring your elbows up to cover your face. You pack offers protection for you back, leaving only your buttocks and legs exposed. The bear may bite and scratch you, but you must remain still and silent. This sounds incredibly difficult, but many "ordinary" people have done it. People who have played dead and been bitten and scratched by grizzlies have told me that they weren't aware of any pain during the attack. Once the bear leaves you, don't move, as the bear may be watching you from a short ways off, looking for signs of life. Continue listening, and only move when you are sure the bear has left the area.

So, apparently if you are being eaten by a bear, you should do everything you can to squash your survival instincts. Let the bear have a bit of a nibble. Whatever, you didn't need that buttock anyway. Oh yeah, if the bear is eating the person you love most in the world next to you, just, you know, just lie still and don't say anything. Easy. His body will be in such an extreme state of shock that he's not feeling anything anyway, so just let it be. Bleeding to death? Wait until the bear leaves. That might be a while. Oops, you're dead. Easy.

But before you think that maybe bears aren't so bad - they are just enforcing the rules in some bizarre Mother Nature-adjudicated game of Sleeping Lions - read on:

If the bear enters the camping area while you are asleep and pulls you or one of your party out of the tent, this is the time to fight back. Do not play dead in this situation. This is one of those extremely rare situations that have occurred periodically in Yellowstone and other areas in bear country. The person being attacked usually isn't capable of resisting the bear, so it is up to the rest of the group to distract or deter the bear. I would definitely use my pepper spray. This is a volatile stituation and everyone is in danger of being injured, bit without help, the person being dragged off will almost certainly be killed.

Well, shit. I am not sleeping in the woods. Nope. And I may need to take a Valium before hiking anywhere. And I'm buying some bear spray and an airhorn and a little bell, and maybe some tactical weapons and full plate armor. And maybe I should take up bear blasting.

See, I'm sure some Americans work themselves up into similar froths about our spiders and snakes. The thing is, I can kill a spider with my foot or a quick squirt of fly spray. Snakes bite once, usually out of fear, and then they generally fuck off into the undergrowth so you can immediately tourniquet your wound and head off to a hospital. They certainly don't sit around a couple dozen yards off waiting for you to try to move so they can attack you again. 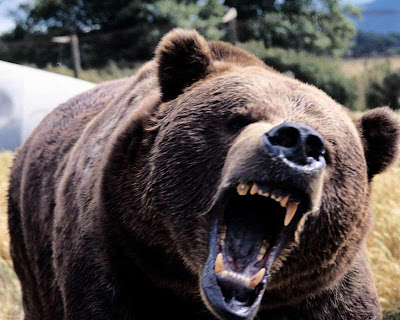 This is still not dampening my enthusiasm for this trip. I'm just taking into account the fact that I might be eaten by a bear, that's all.