"Now this could only happen to a girl like me ..."

I left Sioux Falls with mixed emotions that made the final week of the trip bittersweet. As we crossed into Minnesota on the way to Madison, Wisconsin, I knew I was leaving behind the mountains, high plains, and geothermal marvels that I found so compelling and speeding toward the large city environments that have always been my home. Home was a thought that both attracted and repelled me, containing within it an intimidating list of summer projects that I would have to face once back in Philadelphia. Oh, to be able to travel forever, or at least until home seemed more appealing.

In the meantime, we had found an unexpected must-see stop on our journey: the Spam museum in Austin, Minnesota. Yes, the whole concept of a museum devoted to Spam is absurd, but I was sold when I read on their website that they had a Monty Python exhibit. The museum had a terrific gift shop containing literally every promotional item you can imagine emblazoned with Spam logos, but I could barely believe that they didn't have any kind of restaurant or cafe! Surely a Spam Museum would be the perfect place to promote their (oft maligned) canned meat by preparing interesting Spam recipes for visitors to try. I had been looking forward to some kind of gourmet Spam sandwich or Spam stir-fry or Spam salad, but I left disappointed. Bad form, Spam Museum!

Instead, we ate at another small-town culinary gem in the same mold as Murdo Drive-In: Tendermaid burger shop. While we watched, our server threw slices of cheese into a giant vat of ground beef patty to melt before scooping both ingredients onto waiting buns. I can understand even more clearly why America has such an obesity problem. This is absolutely Beef Country, and they know how to cook it.

By dinner, we arrived at the Madison apartment of our buddy Brandon, aka Malechite, and his collection of games, game-related toys, NIN paraphernalia and nice photography equipment, but we were soon back out the door, as I was on a mission to experience Wisconsin cheese. I love cheese. I mean, I really love cheese. Wisconsin delivered. We ate dinner at the Great Dane, where I began with fried cheese curds, then tried their $10.50 gourmet macaroni and cheese for an entrée. You wouldn't think that mac and cheese could possibly be worth $10.50, but this one was (and it lasted two meals, since I took away leftovers). We also visited Woodman's, a supermarket that is similar to any number of East Coast chain stores such as Giant or Wegman's, except that it has three whole aisles of cheeses. We bought some bags of cheese curds for the road. I never did get to try squeaky cheese curds, however, or poutine -- next time, Madison, next time.

In between cheesy destinations, we stopped at the capitol building; we had arrived at an opportune time. The recall election of awful governor Scott Walker was scheduled for the next day, and a mid-sized crowd of union supporters had gathered on the plaza to rally for their cause. I stood with them for a while, which was a nice feeling -- I'd followed some of their political misfortune from back in Philadelphia, and it was gratifying to feel as though I was actually taking part in a small way, even if I couldn't vote -- until I felt the protest had become a little too dirty hippy for me. I can stand (barely) watching people sing songs like "Oh Susannah" with tacky altered lyrics, but when there's talk of performing an "om" to the "strawberry moon," I start to get kind of mad that some people are making the movement appear kooky to the general population. Don't come to the rally wearing your purple rag skirt and tie-dyed shirt, for god's sake. You're fighting for jobs, right? Come looking like you're going to a job interview.

(As we discovered on the way to Chicago the next day, the recall election failed. More bittersweet.)

The "strawberry moon," by the way, was a reference to the partial lunar eclipse that took place that night -- what is up with eclipses occurring on this trip? -- coloring the moon a deep rusty red. We caught it rising over a lake, but we were driving and could't stop to take photos.

We did get a couple of photos taken, though, for an ongoing project of Brandon's: 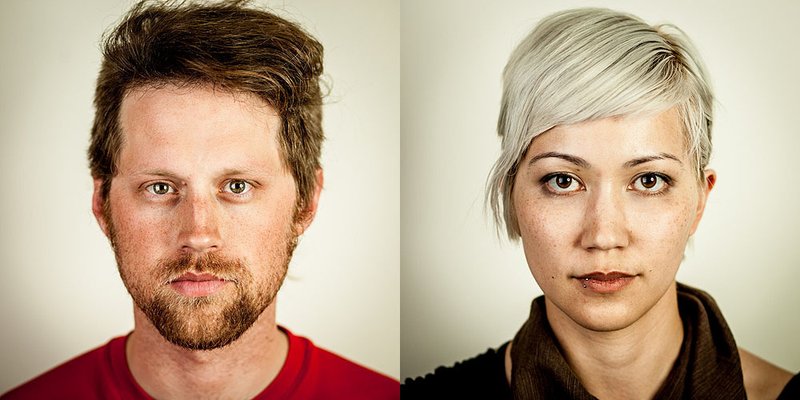 And here are the ones that we took: On June 5, we left for the largest city on our tour, Chicago, one of Matt's favorite places, although I had never been before. Our stay there was also the longest of the roadtrop: a whole three nights in the same location! Wooo! Since it was such an extended stay, we lodged at an Extended Stay America 15 minutes from downtown, and experienced the luxury of being able to leisurely explore without immediate pressure to move on. We didn't have to see ALL of Chicago in four days; we could always come back (and probably will).

Some of the highlights included the Field Museum, where we saw the mounted fossilized skeleton of Sue the Tyrannosaurus Rex and spent hours in the most extensive and well-curated Native American exhibit I've ever seen, the observation deck of the Hancock Building at night, the Art Institute, which houses Seurat's A Sunday Afternoon on the Island of La Grande Jatte and featured a Roy Lichtenstein exhibition, and a free concert of ambient electronica and IDM in Millennium Park.

But enough of these words; pictures speak louder than.

Can I tell you how jealous I am that Matt is standing in front of 'Drowning Girl'? Roy Lichtenstein is my *favorite* artist and that's my favorite piece. This blog is truly incredible. I love living vicariously through your travels!!